What are Velvety Tree Ants?

Generally small (1/16-1/4 inch) ants with brownish black heads, red thorax, velvety black abdomen. They can invade a home by the thousands, they can excavate wood framing, infest insulation, and they bite.

Fine to slightly course sawdust emerging from around window frames, wood vaulted ceiling joints, large parades of ants along exterior foundations or trailing between trees and buildings—and they will bite if they crawl on your bare skin.

Velvety tree ants can cause structural damage similar to carpenter ants. costing thousands of dollars to repair. Infestations in or around houses can result in painful bites to adults, children and pets if they encounter these aggressive ants.

Call Leupitz Pest Control immediately at (503) 362-8100 to confirm and eradicate these pests before they cause more damage to your home or adversely affect other people who encounter them.

Similar to carpenter ant prevention, not allowing trees or shrubs to come in contact with the structure (either along the ground, siding, roof or overhead utility lines) is vital. Elimination of moisture problems in and around the structure is important. In our experience, velvety tree ants favor environments that are wet, so it is prudent to inspect structures near these areas for their presence. Inspect firewood (especially hardwood) before delivery on the property, and do not allow such material to have contact with the exterior siding. Ivy and other climbing and crawling vegetation are a cover for their presence. Keeping such vegetation under strict control in the vicinity of a structure can reduce the risk of infestation. 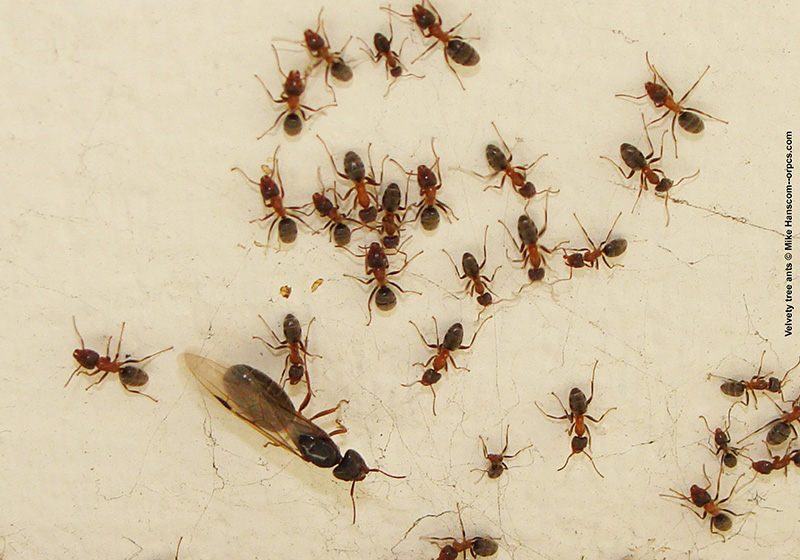 Primarily a pest in California, velvety tree ants (Liometopum occidentale) have increasing been found infesting homes in the Willamette Valley and Cascade foothills. Typically, they nest in tree stumps and cavities (favoring hardwoods such as oak and poplar) or under stones on the ground. They tend to be found more commonly in areas near streams. When infesting wood, they can mine wood and produce frass much like carpenter ants, only of a finer texture. They typically eat honeydew produced from aphids, but will go after other food sources including other insects and carrion of birds and animals.

When infesting homes, they tend to travel through the home rather than nest in it. However, when they do nest in a structure, they can cause damage similar to carpenter ants (fine to medium textured sawdust-like frass, oftentimes with other organic material mixed in). They can invade a home in large numbers in a short period of time. Their bite is quite painful, spraying an acid into the punctured skin that can cause discomfort for some time.