Small (1/8-inch), wingless brown or brownish-black insects, able to jump 6+ inches, and feed off of animal or human blood.

Small (1/8-inch), wingless brown or brownish-black insects, able to jump 6+ inches, and feed off of animal or human blood.

They will continue to multiply (a single female flea can lay 400-500 eggs in less than a year). Besides biting, they can spread disease including plague, murine typhus, and dog tapeworm.

To mitigate the existing flea population, call Leupitz Pest Control immediately at (503) 362-8100 to put in place a regimen to eradicate the fleas and the threat that they pose to pets and people.

It is important for the property resident to prevent or eliminate entry onto the property of other wild animals, such as mice, rats, opossums, and other animals that can carry fleas in. If flea treatment becomes necessary because of interior infestations, a veterinarian or other animal grooming professional must simultaneously treat the pet. Pet bedding should be removed and cleaned or disposed of. 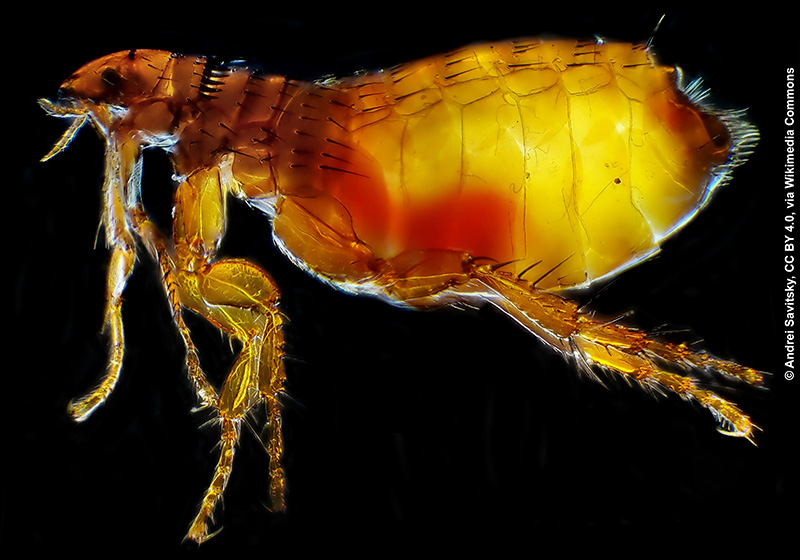 Over 10 known species of fleas exist in the Northwest; the most common to affect urban populations is the pervasive cat flea (Ctenocephalides felis), which affects cats, dogs, other mammalian wildlife, and humans. Fleas develop by a complete metamorphosis (egg, larva, pupa, and adult). The larvae do not bite but will live on the blood left behind in the adult flea fecal matter. In home interiors, flea larvae will typically shelter in carpeting. Adult fleas will begin to seek a blood meal within a day or two of emergence from the pupa stage and can, under optimum circumstances, live for a year.

While fleas can be a problem inside of a home or business at any time of year, flea populations typically peak in western Oregon during the driest parts of late summer (August and September).

Many pet owners have resorted to using topical flea products available over the counter or through veterinarians to control fleas on their pets. In recent years, reports have begun to come in that fleas in some parts of the U.S. are now developing resistance to these products. This makes professional treatment of dwellings and properties for flea control more important than ever. Additionally, these topical treatments generally will not prevent fleas from coming into the structure from outside but will merely reduce the risk of flea bites for the animal itself.