Fully grown German cockroaches (the most common of cockroaches found in Oregon) are 1/2-5/8-inch long, fast running insects, brown with yellow longitudinal stripes behind their heads. Often found together with smaller “nymph” roaches.

Live cockroaches seen running away quickly toward darker hiding places, especially in and around kitchen cabinets, refrigerators, stoves and other appliances. Dark cockroach droppings along edges of kitchen cabinet doors, around electrical wall plates and light fixtures. Sightings are most frequent around warm, humid locations.

Cockroach poop is a health hazard, especially for children, spreading disease and contributing to allergy and asthma issues. Food contaminated from cockroaches must be thrown out. Acute infestations may require replacement of stoves, refrigerators, hot water heaters or other appliances for complete control. In apartment buildings, infestations can easily spread from unit to unit, affecting multiple households.

What you need to do about them:

While many “do-it-yourself” remedies exist (including over-the-counter products), many fail to adequately control infestations, especially in multiple housing units.

If you find cockroaches inside, call Leupitz Pest Control immediately at (503) 362-8100 to confirm and initiate prompt measures for eliminating these health-threatening pests for the well-being and safety of adults and children on site.

Sanitation is key to cockroach control. This includes keeping kitchens spotless, cleaning up food from counters, walls, floors, etc., and limiting access by insects to food garbage inside. Inspect bags from food stores, second hand stores, etc. to make sure that unwanted cockroaches don’t hitchhike into the home from elsewhere. While many over-the-counter products, from sprays to baits, are available to the homeowner for cockroach control, such remedies often fail because of the pervasive nature of cockroaches to hide behind cabinets, under appliances, and embed themselves in the insulation of hot water heaters, refrigerators and kitchen ranges. 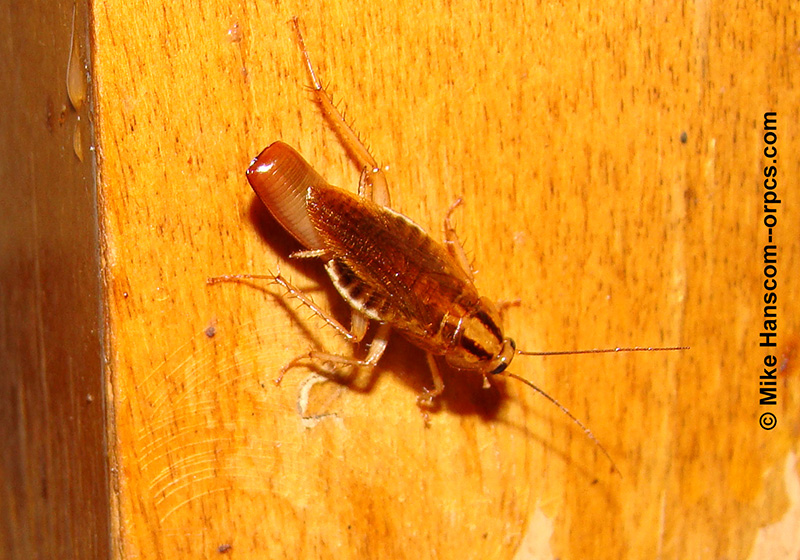 German cockroaches (Blantella germanica) are problematic in homes, restaurants, grocery warehouses, and other locations where infested items have been introduced into a home or facility. Cockroach populations have also increased in the Pacific Northwest as people have moved in from other warmer climates where cockroaches are more prevalent.

German cockroaches have an extremely high reproduction rate, which makes control extremely difficult or impossible for a typical resident. They do survive very well in warm, humid interiors such as in kitchens, bathrooms, and utility rooms. As a general rule, they will shy away from light and stay in dark cracks and crevices, coming out into the open more readily at night. Introduction of cockroaches into a home can occur from transporting groceries from an infested store, from infested second-hand furniture or appliances, or from interior migration from neighboring apartment units. In our mild Northwest climate, these pests do not typically survive very well outdoors as compared with other parts of the U.S.

Other cockroach species that have been observed in Oregon include brown-banded cockroaches (Supella longipalpa), which are slightly smaller than German cockroaches, and the large American cockroach (Periplaneta americana), which can occasionally come in with infested produce or other items shipped from the southern U.S.