What are Moisture Ants?

Generally small (1/8-inch) light-brown colored ants. They can invade a home by the thousands, they can excavate wood framing and infest insulation.

Moisture ants are nearly always indicative of rot or moisture damage in structures. Inaction can result in the spread of both wood decay and moisture ants with thousands of dollars of repairs required to remediate the problems.

Call Leupitz Pest Control immediately at (503) 362-8100 to confirm the identity of moisture ants, determine the cause of the wood decay attracting them and take steps to correct the moisture problems, eradicate the infestation, and recommend repairs to replace the wood rot decay in the structure.

Control the moisture under and around the structure. For homes with crawl spaces, this includes adequate subarea ventilation, vapor barriers in good condition, and adequate roof drainage away from the building. Plumbing and roof leaks in the structure must also be immediately addressed. 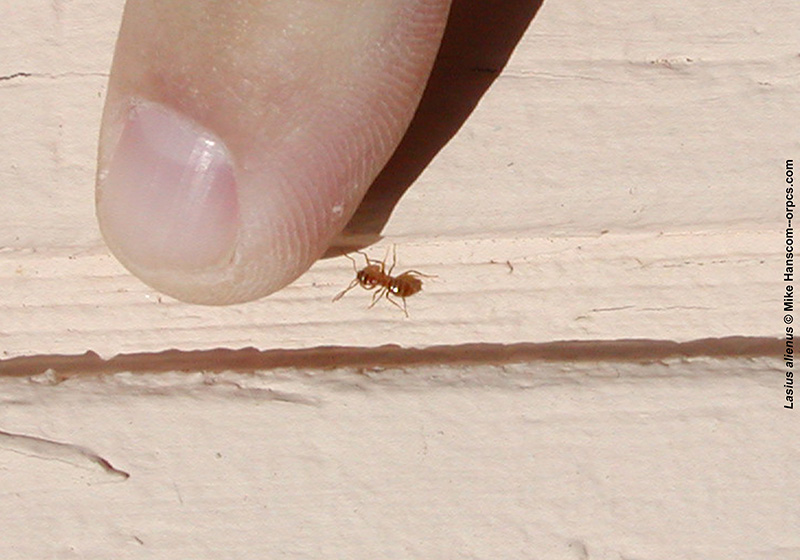 This pest is one of the most abundant species of ants in the United States. In the Pacific Northwest, its range extends north into British Columbia. While typically known for their presence in open areas in an agricultural setting (hence the common name ‘cornfield ant’), Lasius alienus has been observed causing isolated damage to wood members in Pacific Northwest structures.

Moisture (cornfield) ants tend to be a secondary structural pest when found in a dwelling. Oftentimes they are found where fungi rot damage is already established. They will nest in moist to near-saturated ground, generally in a subarea crawl space, and build a mud tube-like mastic structure of multiple galleries between the ground and wood. Sometimes their structures are mistaken for subterranean termite tubes. Similar to carpenter ants, moisture ants will bore out fungi rot-damaged wood as well as adjacent wet but sound wood and extend their colony into the area. They can leave behind frass deposits similar to carpenter ants, though it tends to be darker in color due to the higher concentration of rot damaged wood material.